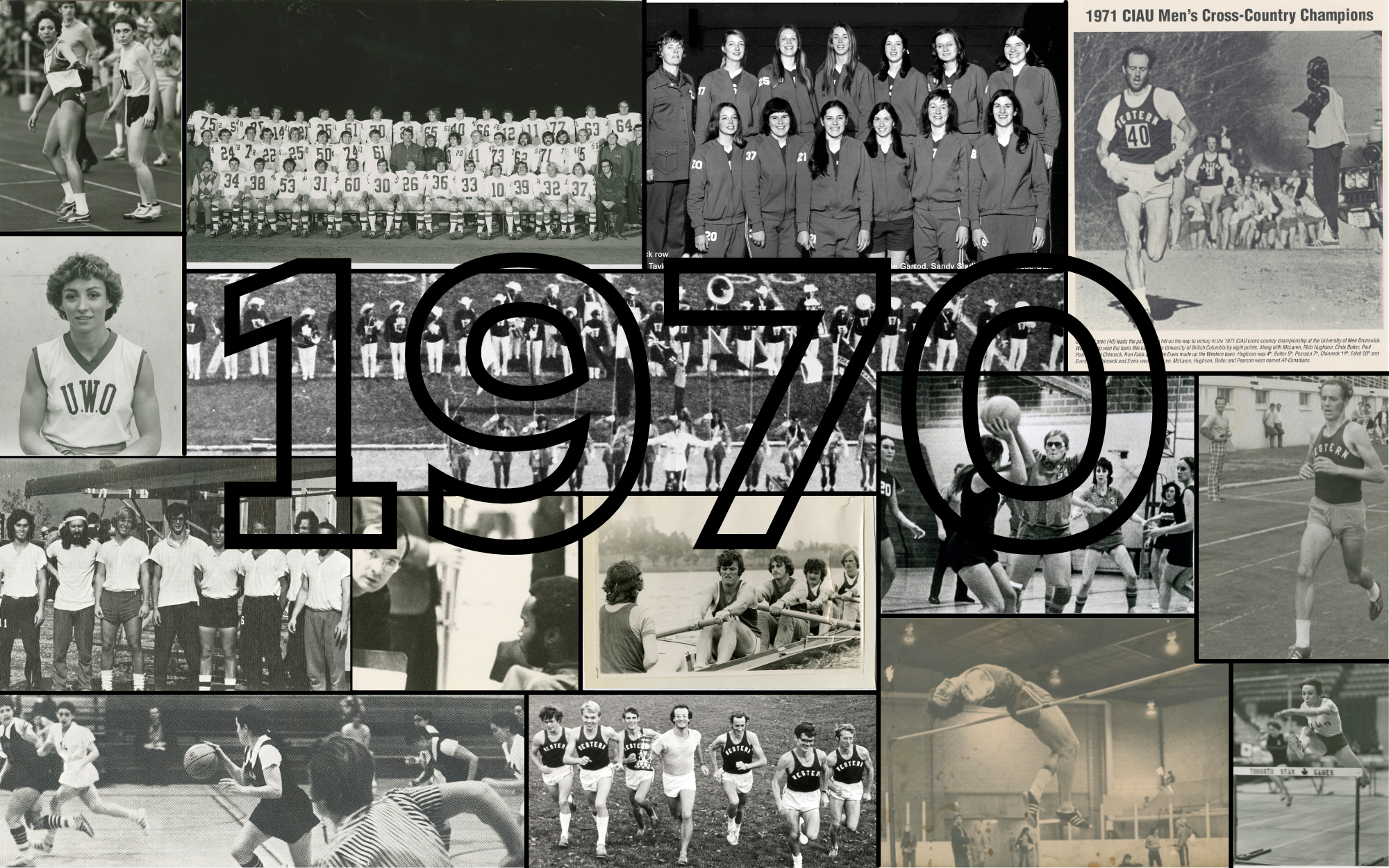 It is a “Golden Jubilee” celebration for many Mustangs athletic alumni in 2021-2022!

50 years ago, at the beginning of the 1970s, and Western’s time of great athletic achievement, ten teams took to their tenures and sought out their own championship titles. These titles would include both national and provincial titles.

Rowing under Phil Fitz-James won OUAA championships in 1970 and for several years after, basketball under Doug Hayes won championships in their respective league, and squash would begin a decade-after-decade domination of the sport at the OUAA level and beyond.

If the standard of measurement for success was championships achieved, then the 1970s stand among Western history’s finest decades of sport achievement with 74 championships won by the Mustangs.

Women’s volleyball received many accolades over the span of several years. Under the guidance of stellar volleyball coach Joy Taylor, the first volleyball Ontario championship would be won in 1971-72. Fran Wigston Eberhard would step in as coach, and help the women on to dominate Canadian university volleyball, winning the OWIAA title every year beyond 1971-72, through to 1977-78. They would also add three CWIAU national championships in 1971-72, 1974-75, and 1975-76 and three CWIAA silver medalists.

The men’s cross-country team became the first in Western’s history to win a CIAU-sponsored national championship in 1970-71, and would repeat their national championship win the next year with McLauren taking the individual honours. A rise to national prominence was due in large part to the arrival of legendary track and field coach Bob Vigars in 1968. Vigars led them to three OUAA and CIAU championships in the 1970s. Men’s squash began a complete dominance in Ontario in men’s squash, along with the unrivalled distinction of winning the NCAA title over perennial champions Harvard and Princeton.

Football continued to be the dominant sport at Western, producing the largest amount of revenue, but also having the greatest budgetary expenditure. The Mustangs returned impressive dividends during the 1970s under new coach Frank Cosentino. The Mustangs won both the Yates Cup and the National Championship Vanier Cup in 1971 and 1974. Darwin Semotiuk would take over from Cosentino, and lead the Stangs to back-to-back Yates Cup and Vanier Cup Championships in 1976 and 1977.

Intercollegiate Athletics at Western during the 1970s might arguably be judged as the finest decade in the University’s history—a decade during which:  Western embraced 21 sports for men and 18 for women, one of the largest and most varied athletic programs among North American colleges and universities; boasted 17 full-time faculty member coaches; transferred the responsibility for administering athletics from the custodianship of a single individual to the academic/democratic process of a new Faculty of Physical Education; and witnessed the glorious success of its various teams—3 national championship in women’s volleyball; 4 national football championships; 2 national champions ships in men’s cross country; and Ontario championships in men’s squash, men’s and women’s rowing, women’s gymnastics, men’s fencing, wrestling, men’s and women’s tennis, men’s badminton, soccer, rugby, and men’s cross-country running.