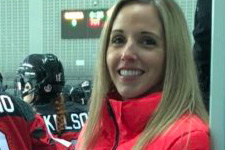 Leanne Peters may not be strapping on skates at the Winter Olympics in Pyeongchang, but as the team doctor for the Canadian Women’s hockey team, she can’t help but feel the same national pride.

“Am I really at the Olympics? I ask myself that question multiple times a day,” said Peters, BSc’02, MD’06, from the Kwandong Hockey Centre. “We put on the logo every day. It would be easy enough to get into routine and take it all for granted. But then there are those moments when people remind us of the privilege and honour of wearing the maple leaf and representing our country.”

Moments like the round of applause that erupts from passengers when the airplane captain announces the team is on board, or the small-town rinks that have standing-room-only crowds watch practices. The women look to reassert their dominance as Olympic champs after bringing home gold in 2014 at the Sochi Olympics with a thrilling 3-2 overtime win against the United States in the gold medal game.

“Wherever we are travelling, complete strangers exude such respect for the Canadian logo. We don’t need to speak the same language to recognize the admiration,” she continued. “When the team lines up on the blue line, and they play O Canada at the start of the game, I am always reminded of the magnitude of this role, and the once in lifetime experience I am living.”

Canada will take on Russia – known for these Games as Team OAR (Olympic Athletes from Russia) – Sunday night in its Olympic opener.

While the Stratford family medicine and sports medicine doctor understands she has a job to do in South Korean, Peters admitted the experience will be exhilarating and overwhelming to take in.

“I am not sure it will ever truly sink in. Perhaps when we arrive in the Olympic Village or at the Opening Ceremonies.,” she added. “Maybe it won’t sink in until it’s all over. All I can do is try to stay in the moment and soak it all in.”

Peters has worked with Hockey Canada’s Women’s program since 2008, when she was doing a fellowship at the Fowler Kennedy Sport Medicine clinic at Western. Over the past 10 years, she has have worked with all three of the National Women’s hockey programs, traveling to with the U18 and Senior National teams to international tournaments in Switzerland and Germany.

The Olympics is a much larger stage and, consequently, has been much more demanding time-wise leading up to, and at, Pyeongchang.

“I knew well in advance that I was on the short list for consideration so we (family) had a lot of time to discuss what this would look like and if we could make it all work,” Peters said. “I definitely had to take a lot into consideration. In my everyday life, I run a family and sport-medicine practice in Stratford and have a husband and two young children. Leaving for 200 days of the year means significant time away from my family and friends, my patients and my practice. But, of course, when I got that phone, call my answer without hesitation was ‘Yes.’”

The support staff is fully integrated into the team’s daily schedule and, as team doctor, Peters is leading her group which includes two athletic therapists, a massage therapist, a sport psychologist and a strength and conditioning coach. They work in collaboration to monitor diet, supplements, fitness levels, signs of fatigue or overtraining and hydration levels.

“I provide routine family medicine care and immunizations, as well as the sport medicine role of assessing and managing injury, working closely with the GM and head coach, to guide return to play plans for injured players,” she explained.

Anticipating the Olympic atmosphere to be unparalleled, Peters hopes she’ll always be able to remember the patriotic feeling of being part of a team representing an entire country.

“I want to be present and make the most of each day,” she said, hoping she can inspire her two young children to “work hard, stay dedicated and achieve their dreams. It has been such an honour to be a part of this team. This is an exceptional group of professionals and athletes who wear our Maple Leaf with pride and represent our nation. No matter the outcome, this is a once-in-a-life experience, and I will be eternally grateful for the opportunity.”