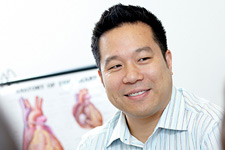 Dr. Michael Lee-Poy, MD’03, doesn’t hesitate in lauding Western and the Schulich School of Medicine & Dentistry as the motivation behind his early success as a family physician.

“I think back to when I first applied for medical school and how Western appealed to me because they really have a heavy emphasis on the patient-centred model of care,” said Lee-Poy, a Kitchener family physician. “I liked that continuity of care, that relationship with patients. Going through medical school and clerkship is when I realized family medicine really optimized my ability to follow patients along, the ability to form relationships and the continuity of that relationship.

“The idea you can share in their lives and they allow you to come into their lives for the most sensitive things – the happy things, the sad things, the things they wouldn’t tell other people – they trust you with that. That really drew me to family medicine, that relationship-based patient-centred model. Western really fostered that for me.”

“It’s a very humbling honour. But it’s also nice to know people feel you are doing something that’s worthwhile, that you’re helping other people,” said Lee-Poy, a coordinator and one of the original faculty members at McMaster University’s Michael G. DeGroote School of Medicine, Waterloo Regional Campus.

“We all go into medicine wanting to help people; it’s still nice to know that people acknowledge it and say, ‘We notice what you’re doing in your work.’ While these awards point to one person, they tend to point to a system that allows people to pursue their passion, to pursue education and to pursue clinical excellence. No one can to do that in isolation.”

Following his academic fellowship in 2006 at Western, Lee-Poy played a key role in helping start the Centre for Family Medicine in Kitchener, a community teaching site that sees plenty of fellow Western graduates.

In his latest initiative, Lee-Poy is a project lead on TransEd, a new online educational tool focused on transgender health. It’s a subject “not really taught well within our health-care professional schools,” Lee-Poy explained. Developed in collaboration between McMaster and Waterloo universities, and launched last fall, the tool arms postsecondary health-care students with tools to improve comfort and competence in transgender care.

“It’s important for health-care providers to be educated to minimize and not be part of the barriers, or part of the stigmas, around transgender issues,” he continued. “It was a need I saw in delivering it locally, but I wanted it to be available broader, in an open-educational access kind of way for all health-care learners, from doctors and nurses to pharmacists and social workers.”

While Lee-Poy’s schedule is busy as a family physician and educator, the relationships and connections he continues to make let him know he’s on the correct path.

“Western was a huge part in the formation of that part of my personal and professional identity” said. “I thank them for that.”