'Once' star finds magic at Western 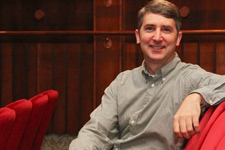 “I cannot explain it very well. I recall grabbing a bow and just drawing it across the strings,” Hamacher, BMus’93, explained. “It probably sounded like a bag full of cats been drowned – but it didn’t matter. To me, it was just the most magical sound. I had absolutely no introduction to orchestral strings, but all I thought of was that sound – that’s it.”

For the last four decades, music has been “it” for the accomplished classical musician and actor who returns to London this week in the Grand Theatre’s production of the Tony Award-winning musical Once, which runs through Nov. 4.

Following California, Hamacher and family returned to Canada where he continued to pursue music. He didn’t have his heart set on a career in music until high school, when he began auditioning for universities. Receiving offers from both Queen’s University and the University of Toronto, he considers his Western audition the pivotal moment in his career.

“My audition panel was Jeff Stokes (then Don Wright Faculty of Music Dean), Jerome Summers (then Symphony Director) and Malcolm Tait, who would end up becoming my professor,” Hamacher said. “All three of them were listening to my audition. By the time we got to the end of it – I wasn’t much of a pianist at the time and I’m still not – Jeff said two things, ‘wrap up your piano requirements as quickly as possible because it can be a headache if you drag your heels,’ and two, ‘start looking for a place to live in London.’

“I thought, ‘OK, I’ve met the people who are going to shape my university career.’”

At Western, Hamacher did it all – from playing with full symphony orchestras and the early music program, to Purple Patches and pit orchestra performances in the early days of the school’s opera studio.

“Coming to Western, the faculty had such a broad variety of channels for students to learn. It was the breadth of opportunities I really came to appreciate, looking back on it now.”

Since 2004, Hamacher has taught guitar and cello privately at his home studio and for organizations such as the Queen’s Conservatory of Music. He has also performed with the Kingston Symphony and, as of the 2012-13 season, was appointed the principal cellist of the Melos Chamber Orchestra.

In 2014, his career detoured somewhat when he pursued a role in Once in Toronto. While he had no musical theatre experience, he went through the process and “just about fell over” when he was offered an understudy role in the production.

“I can’t tell you how scared I was walking in for the first day of rehearsals in Toronto, surrounded by people who were knee-deep with television and movie experience,” said the 48-year-old Kingston, Ont. resident. “I found it so daunting. But learning the show, learning what I had to do, their encouragement really brought me to the point that I wasn’t a fish out of water. I can do this.”

Hamacher now joins the main cast and finds himself back in London for the Grand Theatre’s production. The musical, set in a raucous Irish pub with an ensemble of actor/musicians, tells the tale of a Dublin street musician on the cusp of giving up his dreams and his chance encounter with a woman who refuses to let him do just that.

In the show, the cast also serves as the orchestra, with exiting cast members simply stepping to the side of the stage to sit down.

“Those who have not seen it in person are going to pleasantly surprised to see how we all sing, act, move, play instruments; the whole process of the show all happens on the stage,” Hamacher said. “There are few proper exits; we become something like the Greek chorus. We are not in the scene, but we are not inert.

“It becomes not just an experience of watching a scene, or the main players, but there are a lot of side players that have their own parts to play in the process of the show. And the set design reinforces the inclusiveness of basically all of the players for almost all of the show.”

Hamacher is thrilled to be back in London, taking the stage just a few kilometres down the road from where his music career took hold.

“You make the investment. When it goes well, you can say to yourself, ‘I did this,’” he said. “Thinking about my experiences at Western, I didn’t do anything in particular to channel my efforts into this (musical theatre), and yet the education I had, that planted all the seeds of understanding, I can now leverage in the work I do here. In that sense, I can’t tell you how grateful I am to the program at Western. The foundation I have continues to serve me well.”

The Grand Theatre presents the Tony Award-winning production of Once, a raucous musical that tells the tale of a Dublin street musician on the cusp of giving up his dreams and his chance encounter with a woman who refuses to let him do just that. Tickets are available by visiting the Grand Theatre Box Office, 471 Richmond St.; logging onto grandtheatre.com; or by calling 519-672-8800. The show runs through Nov. 5.