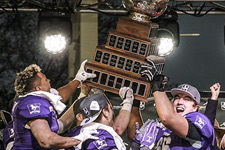 The Western Mustangs ended a 23-year Vanier Cup drought with an exclamation mark, knocking off the defending champion and No. 1 nationally ranked Laval Rouge et Or 39-17 in the Canadian university football championship game November 25 at Tim Hortons Field in Hamilton.

It marked the seventh Vanier Cup for Western in program history and served to avenge the Mustangs’ 2008 loss against Laval in the championship game also played in Hamilton that year. Western’s last national championship victory came in 1994 against Saskatchewan.

Western’s quarterback Chris Merchant of Calgary captured the Ted Morris Trophy as the Vanier Cup’s most valuable player rushing for two touchdowns and tossing another in the victory. He finished with 365 all-purpose yards completing 13 passes on 20 attempts for 276 yards while adding 89 on the ground.

At the U SPORTS football All-Canadian Gala on November 23, Mustangs linebacker Nick Vanin was honoured for his achievements, both on and off the field, with the prestigious Russ Jackson Award. Vanin is the first Western student-athlete to win the Russ Jackson Award, he is also the school’s first-ever nominee for the prestigious trophy, which was first presented in 1986. The award recognizes a football player who best exemplifies the attributes of academic achievement, football skill, and citizenship.