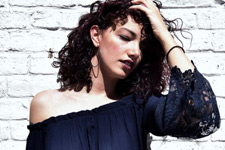 As an undergraduate at Western studying English and Creative Writing, she had dabbled in the music scene. She won Western Voice in her first year, recorded an EP at CHRW and played some shows. And then she withdrew.

“I had drifted away from music because I hadn’t seen any success with it and I didn’t think it was something that was a feasible option for me to pursue. I was thinking of going to law school or journalism school. I was maybe going to apply to school in New York; I was all over the place,” said Botelho, BA’16, a singer-songwriter who goes by the stage name Poesy.

A friend who had studied music encouraged her to pursue her interest and talent, despite a lack of progress at the time. She stuck with it and it paid off. Last month, Poesy beat out four other up-and-coming artists, winning the right to release a new song on CTV’s The Launch, a Canadian reality television music competition that premiered this year.

“I’ve had so much fun and it’s been a really wild time. At first, I was really hesitant about doing The Launch just because I feel like singing shows have a bit of a bad rep now, just because there have been so many,” Poesy said.

But the format of this show drew her in. In each of the four episodes, five musical acts auditioned for a panel of mentors, including Shania Twain, Jennifer Nettles of Sugarland, Nikki Sixx of Mötley Crüe and Fergie of The Black Eyed Peas.

Two contestants in each episode were selected to advance to the second phase of the competition, given 48 hours to record their versions of an original song, working with producers to adapt the song to suit their individual styles and eventually performing it for a live audience.

On the last of the four episodes, which aired Jan. 31, Poesy – whose mentor was Fergie – won with Soldier of Love, written and produced by Grammy and Academy Award-nominated hit-maker Stephan Moccio, BMus’94. Backed by a media push from CTV and record industry executive Scott Borchetta, the song is available for download now.

It took some twists and turns to get to where she is today, Poesy said. Her creative interests grew and were nurtured at Western, when she switched from a Science degree to a Humanities degree two years into her studies. After taking a Creative Writing class, she found a skill for the craft and didn’t look back. She immersed herself in her new faculty, joining the Students’ Council, becoming a mentor and a soph, all while writing and playing music.

“By the end, I was an Arts & Humanities student, through and through. I played a lot of music around Western, too. I won Western Voice in my first year and the prize was that I got to record an EP (at CHRW), which was all original music. We threw a big release party and I think that’s what sparked things for me, thinking maybe, I could do this,” Poesy said.

She formed a band with some of the individuals she played with at CHRW and elected Poesy as her stage name, an archaic word for poetry and a callback to her academic studies.

Discouraged in the industry near the end of her degree, Poesy, with the urging and support of her best friend, recorded a second EP – now under her new name – in a small recording studio on the third floor of Talbot College. She stayed up recording until 3 a.m. most nights but doesn’t regret a thing.

“It was really fun, and I rediscovered how much I loved music. It made me feel like I should keep doing it and find a way to make it work,” she explained.

After graduation, she landed a couple of part-time jobs to support herself while putting time and energy into booking live shows. She played a number of them in Toronto and last fall, opened for Mother Mother at London Music Hall.

“I’m not a person who can sit down and write a song when they feel like it. I don’t follow some technique to make the perfect song formula,” Poesy noted.

“I can only really write things that I’ve experienced personally or I’ve seen someone close to me experience, so I just kind of draw from my own life and wait until I’m too happy, too sad or too angry to put my emotions into words and then I just sit down at the piano. I start playing chords, and start singing over top in a stream-of-consciousness way until something sounds good. Then I write it down; hopefully I don’t forget it,” she laughed.

Working with Moccio was an experience like no other, Poesy added. She hopes, now that the song is out, to collaborate with him again in the future. The entire Launch experience was supportive and encouraging – and she didn’t meet the other contestants or hear what other they sounded like until the episode was produced. It was an unusual approach to a competition that she greatly enjoyed, Poesy continued.

“They wanted us to not feel like it is a competition at all; you didn’t have to worry about comparing yourself to someone else. I had never heard anyone sing the entire time I was there so when I watch the show now, it’s like, ‘That person is so good!’ It was nice because you felt like it was your own experience and you were there to really develop yourself,” she explained.

“I still have a lot of press to do to promote the song and make sure that beyond the show, people know who I am and know my voice. I want to play live a lot.”

As for words of advice, she wants those pursuing creative talents to keep at it and not give up.

“I had a lot friends when I was at Western who wanted to do something that wasn’t necessarily a traditional, linear path after graduation. I think it’s important that these people are supported and celebrated as well to do something unconventional and believe in themselves,” she said.