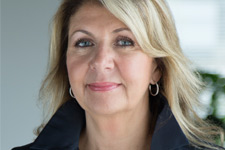 Western Engineering alumna Catherine Karakatsanis, BESc'83, MESc'91, often touted as one of the most powerful women in Canada, has added another honour to her long list of accolades when she received the Professional Engineers of Ontario (PEO) Gold Medal on November 18 recognizing her profound influence on the profession.

Karakatsanis, Chief Operating Officer and Director at Morrison Hershfield Group Inc., is the only engineer in Canada to have led a provincial regulator, the provincial engineering advocacy body (Ontario Society of Professional Engineers) and the national engineering body (Engineers Canada). She has worked tirelessly to promote and increase diversity in engineering, particularly among female engineers, and has been named one of Canada’s Most Powerful Women for four consecutive years.

At Western, she currently sits on the Board of Governors and the Engineering Advisory Council.

The premier award of the profession, the PEO Gold Medal is given only when there is an outstanding candidate, with no more than one annually. It is given to an association member widely recognized as a distinguished practitioner of the profession who has rendered outstanding public service in other fields, on a federal or provincial basis.

Karakatsanis was drawn to Western because of the institution’s strong Civil and Wind Engineering programs. While completing her undergraduate degree, she was interested in working in the Boundary Layer Wind Tunnel (BLWT) alongside two of her favourite professors, Alan Davenport, considered the ‘Father of Wind Engineering’, and Barry Vickery. She was hired as a research assistant at BLWT.

“While completing my Masters of Engineering degree, I worked alongside some of the world’s best minds in wind engineering,” she remembered in a recent interview. “It was at Western where I learned just how important it is to surround yourself with supportive and intelligent people who can help you succeed.”

As a senior leader at, Karakatsanis oversees all operations across Canada, the United States and internationally, and leads four business units representing diverse business segments in both the vertical and horizontal infrastructure arenas.

A devoted advocate for creating a more diverse profession, she has also revised company policies to eliminate bias that negatively impacts female engineers, as well as worked to promote engineering to young people and increase the number of women in the profession during her tenure as President and Chair of the Ontario Society of Professional Engineers in 2002-2003.

“There is a different paradigm of leadership in the workplace today that plays naturally to the strengths of women. The attributes that define a good leader include vision, collaboration, teamwork and effective communication – these are now absolutely necessary for companies to continue to thrive,” Karakatsanis explained. “Women have the capacity to gain the knowledge and skills to not only assume a larger role within the industry, but to become leaders in the field.

“Women are capable, effective and inspiring leaders within our profession. It makes great business sense – women in unity with men form a powerful, strategic combination available to every business today.”

During PEO’s 2009-2010 Council term, she served as the regulator’s fourth female president and inspired the organization to become a world leader in self-regulation.

​As president of Engineers Canada, she worked closely with the provincial regulators to deliver national programs that continue to have a positive impact on the profession and its public profile.

“The future also needs more women in the profession because Engineering is essential in securing Canada’s health, safety and economic prosperity,” Karakatsanis continued. “To do this effectively, the engineering profession and our workplaces must include the greatest possible range of knowledge, skills, experience and perspectives. In order to actively engage the best minds in the profession, we need to ensure a strong core of potentially different views and ways of thinking, which means ensuring more women are joining and staying in the profession, and leading it as well. Society will prosper as a result.”