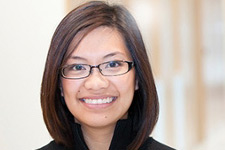 In September 2008, 24 strangers came to Windsor as the first cohort at a brand new Schulich Medicine campus. As the charter class, they have blazed a trail for hundreds to follow.

"It feels like so long ago now – it’s honestly a bit of a blur,” Dr. Genevieve Mortera, MD’12, said with a laugh as she attempted to recall her first few weeks of medical school.

It was back in early September 2008 when Dr. Mortera first arrived for orientation week in Windsor, a city just two hours away from her hometown of London, Ontario. Like most other students entering medical school, the future physician was anxious, eager and, most of all, excited.

But unlike most other students entering medical school, Dr. Mortera and her 23 classmates had an added factor to consider: the campus they were studying at was brand new. They were the first cohort of learners to attend medical school at the Schulich School of Medicine & Dentistry – Windsor Campus.

After the Ontario Government identified a need for more medical school spaces, an incredible amount of time and effort was put into developing a satellite campus in Windsor. The decision was greatly supported by both universities, and members of the Windsor community celebrated that there would be a higher concentration of medical professionals in their city.

The first 24 students – the Windsor Campus Charter Class – became the champions of the program. The young medical professionals were welcomed with open arms and celebrated their decision to act as pioneers for the school.

But beyond the welcome celebrations and media attention, Dr. Mortera didn’t fully realize the role she had taken on as a trailblazer.

“I wasn’t really aware of the magnitude of it all at the time. I was just trying my best to live in the moment and take it all in while it was happening,” she explained. “I chose to remain focused on all of the incredible things the program offered me, such as more one-to-one time with superiors and a significant amount of hands-on experience with patients.”

Dr. Craig Campagna, MD’12, had a similar experience, which was heightened even more since he was born and raised in the city.

“When you’re going through medical school, you’re just so focused on becoming a doctor. Of course it was special to be a part of the first class, especially since it was such a big deal for Windsor to get this kind of program, but I never thought about that impact until I was able to look back on the experience,” Dr. Campagna said.

Establishing something new can come with its fair share of ups and downs, and the first few months of the Windsor program was no exception to this. Dr. Campagna recalls the challenge of learning how to work with the webcast from London, and attending classes in the basement of an older building on campus while they awaited the opening of the Dr. Murray O’Neil Medical Education Centre.

Dr. Campagna and his peers were also faced with a University strike within their first few months of study – something that was overcome with the dedication of faculty and staff, and the support of fellow classmates.

These minor blips in the new program’s first year never made Dr. Mortera doubt her decision to attend medical school in Windsor. She saw them as all part of the challenge, and chose to focus on the endless benefits of the program instead.

“I knew there would be challenges within the first few years of the program, but it was never something that would have deterred me from attending,” she said. “I chose to remain focused on all of the incredible things the program offered me, such as more one-to-one time with superiors and a significant amount of hands-on experience with patients.”

Drs. Mortera and Campagna both benefited from the smaller class size as well.

It has been five years since the Windsor Campus Charter Class graduated, and the 24 students have since gone on to achieve a tremendous amount of success. Dr. Mortera has since moved to Halifax, Nova Scotia where she works as a family medicine physician, and Dr. Campagna has joined a family medicine practice in Windsor and does surgical assisting at Windsor Regional Hospital.

While the majority of the Charter Class has kept in touch through personal and professional events such as weddings and conferences, Drs. Campagna and Mortera are looking forward to celebrating their five-year anniversary through a variety of celebrations.

“It’s nice to be able to share memories and revisit a place that was so integral to my career and my life,” Dr. Campagna said. “I had a wonderful time during those four years and certainly owe a lot to the program for preparing me for a wonderful career as a physician.”