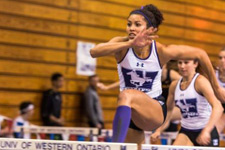 For Joy Spear Chief-Morris, track and field was an escape. The sport was a place to get away from the world, a place she sensed she belonged and, most of all, a place where she chased dreams she never thought possible.

Today, Spear Chief-Morris, BA’17 (History, First Nations Studies), is chasing down her biggest dream yet – training with the prestigious Santa Barbara Track Club, with her sights set on the 2020 Summer Olympics in Tokyo, Japan.

Still adjusting to being out of school and training with a new team, she received good news earlier this month from home. A talented hurdler and winner of eight Ontario University Athletics (OUA) medals and seven U Sports national medals, Spear Chief-Morris was selected as this year’s winner of the Tom Longboat Award, an honour that recognizes First Nations athletes for outstanding contributions to sport in Canada.

Track and Field has long been Spear Chief-Morris’ “place of belonging.” A Blackfoot from Alberta’s Blood Tribe, she was a multisport athlete in high school. By the time she graduated, she realized she had an exceptional skill on the track in sprints and hurdles and started her undergraduate career at the University of British Columbia, competing on its varsity team. When her coach, Derrick Johnston, came to Western, she followed and started competing with the Mustangs.

“It ended up being one of the best decisions I ever made,” Spear Chief-Morris said. “I loved my time at Western; I loved being part of the track team. I made some amazing friendships I know will last a lifetime. I had a very successful career in track. I probably would have quit track if I didn’t make the decision to move.”

And the Mustangs certainly gained from her decision.

At Western, Spear Chief-Morris holds school records in nearly every event she participated in, including in the 60m sprint at 7.40 seconds, the 60m hurdles at 8.28 seconds and the first leg split for the 4x200m relay of 24.4 seconds.

“For me, track created a community. It was knowing after I was done class, I was going to a place where I just felt like myself. That’s what track became for me – this place for me to go and work hard and chase dreams I didn’t know I could have. It was freeing,” she said.

Spear Chief-Morris excelled on and off the track at Western.

In the classroom, she ensured her education was an equal priority. She graduated as a five-time Academic All-Canadian and a five-time member of the Dean’s List. In the community, she helped with initiatives like Western’s Indigenous Track and Field Day, which brings members of local First Nations communities to campus, encouraging participation in sport and healthy living. Spear Chief-Morris also organized a 5km race in her home community in Alberta and has been honoured with awards that recognize her community service, as well.

“I want to see how far track can take me, but I know I have to go back to school eventually,” she said.

“First, I want to make the Canadian Olympic team and go to Tokyo. But I’ve always wanted to have a bit of a larger role helping First Nations people in Canada. I want to be working on the frontlines, working in policy or international relations. Whatever I end up doing, I want to be making a difference in the world for First Nations people, whether that means working with the Government of Canada or an organization in the world.”