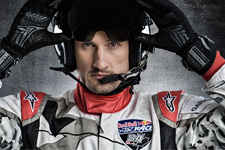 Pete McLeod, BA’07 (Economics), cannot remember a time when he wasn’t flying while growing up in Red Lake, Ont.

The 33-year old Londoner is an accomplished bush pilot, had his pilot’s license at 16, pursued aerial aerobatics at 18, and earned his instructor rating in less than a year.

Following successes at the North American Collegiate Championship – all while earning his Economics degree at Western – McLeod competed in classical aerobatics internationally before switching his focus to racing. In 2009, he rewrote history when he became the World Championship Series’ youngest pilot at 25 and became its youngest race winner ever at 30.

Most recently, McLeod became the first Canadian to claim an overall podium in the Red Bull Air Race World Championship, taking third place at the season finale in October at Indianapolis Motor Speedway. Two weeks earlier saw another first as he and his wife, Allison, welcomed their daughter, Aria, on Oct. 3.

One of the more popular aviation figures in Canada, McLeod sat down with Western News days after wrapping up his 2017 racing season.

What has been more difficult the last couple of weeks – flying your plane at 400 km/hr or becoming a father?

(Laughing) It’s a little relief when the season is over and you get to take a little bit of a deep breath and reset. But, based on what I’ve heard, I may be in for the most surprises with the fatherhood role. The airplane tends to do what I tell it to do and never talks back. Neither does the baby yet – but give her time.

You’ve been progressing in the standings over the years. Now you grabbed a podium spot. What was it that took you to that next level?

It’s not a single moment that sparked it; it’s an accumulation of a lot of hours put in over the last three seasons and things all clicking. Internally – with the team and in my mind – there is a lot of progress being made continually but, of course, in sports, that doesn’t show up to the rest of the world until it’s on the scoreboard.

Probably the biggest change was putting a focus on what I need to do as an athlete and try and not to get distracted by the day-to-day operations. We run a pretty small unit, five to six people at the races, and if everyone does their job there and carry their weight, it really lets everyone excel at what they need to do. It’s about teamwork and surrounding yourself with good, smart people, that makes your job easier.

From a spectator point of view, this is a thrilling sport to watch. How you balance your competitiveness and pushing the envelope for speed, while at the same time knowing there is always a risk in what you do?

The sport itself has a tremendous safety record – but there is no fooling with what we do. One wrong move, or failure of equipment, puts you in a tough situation real fast.

A lot of people think, ‘This guy must be crazy’ or ‘a huge daredevil,’ but honestly, I’m not much of a risk-taker. I don’t ride a skateboard; I’d love to ride a motorcycle but I look at them and say, ‘Wow, these things are too dangerous to get on one of those.’

It’s just my comfort level in the airplane. That’s something that has been developed over the course of my life. The environment I come from, bush flying up North, you learn to think and take care of yourself. A key to any successful risk management is being aware and recognizing the risks. Ignoring them, just because you pretend they’re not there, doesn’t make them go away.

All of this is very calculated – the level of training and preparation, the quality of equipment, the processes in place. None of it is weekend warrior ‘Hey, I’ll go give this a try and see how it works out.’

The risk is real. The consequences aren’t the bright side of what we do, but as long as I’m passionate about it, and feel that I can manage, then it’s something I’m comfortable with.

Flying planes up North. Was that a training ground for where you are now?

Not until I was a teenager did I realize not everyone got in an airplane and flew on a daily basis. It wasn’t a recreational thing in my family. My family had a small fishing business, and so a float plane was my pick-up truck. I was in the plane at 6 weeks old, starting to fly on my dad’s knees at about 3 years old and had my private pilot’s license before I could legally drive a car. A little different, that’s for sure.

Did you run into a lot of naysayers along the way? How did you respond?

The biggest challenge was always my age. I was so much younger than my peers. There were a lot of guys who simply said I was too young. But part of being young is the casual ability to say, ‘You know, screw you, I’ll show you. I’ll prove you wrong.’

Age isn’t a roadblock; it shouldn’t be a discriminating factor on how to perform and prove yourself.

At the time, I entered the series as the youngest rookie ever 25 years old, 20 years younger than the average age and the youngest ever by like 11 or 12 years. It was a big shift.

The Red Bull Air Races takes you to places you’d likely never see without the sport, such as Japan, Dubai, Austria, the United Kingdom. Are there places you look forward to visiting more than others?

I’ve been around the world a number of times – but I’m still a kid at heart from northern Ontario.

I’ve got to see more of the world than I ever imagined I would, or even knew about growing up. I’d never been outside North America until I started competing. Some of the strongest memories are the places that I do well in. The food always tastes better when you win.

Your occupation has a very limited talent pool and you see the same competitors in the course of a racing season. How is that relationship with all the other racers?

There is a certain amount of comradery with the other racers. Certainly, when it comes down to race day and you’re on the track, nobody likes it more than to be out there and beat whoever you’re up against. That’s what drives me.

There are some special bonds and some great friendships. It’s a unique thing we do, so you don’t see some a lot of the animosity you may see in other motor sports. It’s pretty civil. All these guys have worked hard to get here and come from a pretty diverse background. It’s a good group to be around and definitely a good group to compete against.

You graduated from Western in 2007. While your racing schedule keeps you extremely busy, have you been back to campus lately?

Western was a great experience and I enjoyed my time. It was definitely a direction pushed by my family. I wanted to chase my sport, but they said, ‘Get a degree, buddy. It may come in handy because you don’t know how things are going to turn out.’

You learn so much at a place like Western, more than just in the classroom. They’re helping to prepare people for a variety of things and that’s something I always take with me. It was a great four years of my life. I went away and have been living my dream ever since.

I’ve been very, very fortunate. To be honest, people who do what they love are out there, whether it’s in business, sports or art, and they are successful because of it. It’s a passion. It’s nonstop. There are ups and downs, to a point where you just never put it down if it’s what you love to do. My job is my hobby, my passion, my career, my everything. That’s what I do.