Alumnus finds his calling behind the camera 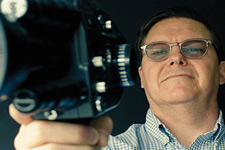 Michael Jari Davidson, BA’08, reckons himself a maverick. And based on the choices, the award-winning filmmaker has made in not one, but two, entertainment industries, you’d be hard-pressed to argue.

Living the dream as lead singer in a rock band, while owning and operating his own record label, Davidson was not necessarily looking for a new vocation to conquer. But one day, the music business was no longer his jam and Davidson needed a change.

“I spent many years in the music business – 14 years to be precise. I ran a record label and I sang in a touring hard rock band. But I woke up one day and decided I just wasn’t having fun anymore. I decided to go back to my first true love – cinematography,” said Davidson, who has two films currently making the rounds on the festival circuit.

Enlightening non-cinephiles on the ins and outs of cinematography has the making of a whole lecture itself. But in his words, the cinematographer (or the director of photography if you’re on a film) takes the words from the scripted page and visually represents their tones and emotions on screen.

“Basically, it’s the director’s job to focus on the actors’ performances and the director of photography’s job to evoke those emotions the characters are going through and the tones of the film and represent that visually through lighting, camera movement and lens choice,” said Davidson, who has also shot music videos for Buck 65, Tegan and Sara and Alice In Chains.

As an adolescent, Davidson’s eye for cinema was not so much formed but forged by watching fiery films like Blade Runner, The Exorcist, Apocalypse Now, Eraserhead and The Road Warrior. These films unabashedly rocked his world.

“I was fortunate enough to be exposed to different types of cinema growing up as opposed to what you could call ‘mainstream,’ safer material,” Davidson said. “I was really influenced by international cinema, too. While some of it was rough around the edges, the 70’s were a great time of cinema for me.”

Fast-forward to his time at Western. It was during – and after – an elective first-year Film Studies class he pinpoints as the actual ‘pivotal’ moment when he knew he made the right choice to come to university as a mature student.

As part of the collaborative Media Theory and Production program, Davidson enrolled in Introduction to Film with professor Prakash Younger, who now teaches at Trinity College in Hartford, Conn.

“He (Younger) is an amazing person and a great teacher,” Davidson said. “One day in class, he showed Sergei Eisenstein’s film October: Ten Days That Shook the World, a silent film from 1928. The visuals on screen blew my mind. I stayed after the screening and he was nice enough to stay behind and we talked for hours about the cinema and cinematography.

“I asked him, ‘Who makes these types of images? How do I pursue that?’ It was that moment when something inside of me said, ‘I have no connections in the film industry but I need to do this.’ Part of the artist inside of me, coming from a musical background, there was something calling me to make images like that. And that was the pivotal moment that started the whole journey I’ve been on since I graduated eight years ago.”

Davidson has two new films set to be released this year. Save Yourself, which won the award for Best Horror Feature at the Bare Bones International Film and Music Festival in Muskogee, Okla., was available digitally on iTunes and Xbox Jan. 24. First Round Down, which stars Dylan Bruce and Kristian Bruun of Orphan Black fame is an action/comedy about a hockey player-turned-hitman, is getting a limited Canadian theatrical release in March.