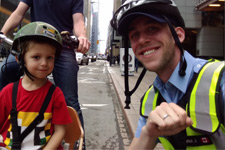 In just one day on the job, in less than two minutes, Kyle Ashley had issued six tickets – at $150 a pop – to drivers stopped or parked in bike lanes nearby the Eaton Centre along Toronto’s Shuter Street. And that’s just a tiny glimpse into the #BikeLaneBlitz campaign initiated and carried out by Ashley, BA’12 (Psychology and Anthropology), a parking enforcement officer with Toronto Police Service, during the month of June.

“This past May, I noticed there was a huge gap in the service we were delivering to the community. The sides of our cars say, ‘To Serve and Protect,’ yet people think of parking enforcement as a collection scheme to make money,” Ashely said. Cyclists in Toronto have felt especially alienated in this regard, frequently voicing concerns over vehicles parking and stopping in designated bike lanes, jeopardizing cycle safety.

“As a cyclist myself in Toronto, I pushed back to my community and said, ‘As police, we recognize we haven’t been the best at delivering service with bike lanes. How, and where, can I do that for you?’ With police services moving towards community-centric models of policing, what better way to do this than to directly ask the people I serve and protect?”

“My commander sent me to the Toronto Police College for social media training. I was told, ‘Here’s the tools; here’s how you use them. Find your voice, find your community and be a part of it.’ For a month, I sat and collected community-driven data and took it to my boss.”

Ashley reached out to Toronto’s cyclists over Twitter, under the handle @TPS_ParkingPal. Soon, responses, requests and praise flooded his account. Cyclists were requesting his presence on streets where drivers, taxis and companies making deliveries frequently stopped and blocked bike lanes. They sent photos of stopped vehicles. They thanked him for what he was doing.

After one of his tweets went viral, Ashley spent the month of June riding his bike in Toronto’s bike lanes, catching and ticketing offenders.

In May, Ashley snapped a selfie with a driver he ticketed for stopping in a bike lane. The driver, a cyclist herself, agreed to the photo, which Ashley shared on Twitter, attracting widespread media attention, ultimately sparking the #BikeLaneBlitz that would follow next month.

The city’s drivers and cyclists really responded to his presence on the streets and online, he added. Taxi drivers, initially frequent culprits of stopping in bike lanes, have made an effort to curb the practice since the #BikeLaneBlitz campaign started.

The biggest offenders, however, are companies such as FedEx, Canada Post and UPS, stopping to make deliveries. Ashley has used his social media training to address this issue, as well.

“They block the lanes, and they do it with impunity, and they do it with a smile and say, ‘You know, I don’t have to pay the ticket.’ It’s the cost of doing business. It’s not coming out of their personal pocket. When I give someone a $150 ticket as an individual, it really hurts, but UPS, no,” he said.

Whenever this happened, Ashley would snap a photo of the company vehicle blocking the bike lane, share the photo on Twitter, including the company and government officials in the tweet, drawing attention and sparking conversation.

“A big part of our campaign has been to highlight what these companies are doing. People expect accountability form their police service, their educators, from all walks of life, and now, public safety and accountability is being held to those companies,” Ashley noted.

“My time cycling as a person and a professional in uniform has been exactly the same. There’s the fear of being doored – and almost 60 incident reports on that alone this year. I try to explain it’s not about the ticket. The consequences (of blocking bike lanes) are quite dire. We are vulnerable road users. When I pull up to a car, I say, ‘Your car has airbags. My vehicle does not.’ I try to give the education piece, too and the city has really responded to it.”

Some companies are making efforts to change their behaviour, he added, and when regular drivers see this, they are more likely to follow suit. If a driver doesn’t see a FedEx truck obstructing a bike lane, they are less likely to stop, Ashley said.

“The cycling community previously felt ignored by the Toronto Police Services and the city. I tapped in with them to show I’m there, and I’m listening. The response has been positive to parking enforcement and that people feel we are making a difference is nice.”

Given the success and positive response to the #BikeLaneBlitz, other police services are looking into having an officer dedicated to bike lanes. And while the blitz was the focus in June, the practice of monitoring and ticketing those blocking bike lanes is here to stay, Ashley added.