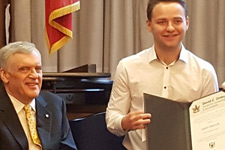 The award, named after Ontario's 28th Lieutenant Governor, recognizes people that champion accessibility, raise awareness about the benefits of inclusion, and foster positive change in their communities. The achievements recognized are helping to improve people with disabilities' experiences in Ontario.

The Honourable Elizabeth Dowdeswell, Lieutenant Governor of Ontario, presented the awards on December 4 with the Honourable David C. Onley and the Honourable Raymond Cho, Minister for Seniors and Accessibility.

Michael Mulligan, BESc’03, from Mississauga received the Role Model Award for his visionary work in establishing Moving Forward, a rehabilitation facility designed to help people with disabilities retrain their neurological system and get back movement.

Mulligan's goal, since becoming an quadriplegic at the age 16, has been to help anyone with any physical disability learn how to transcend their own perceived limitations. Toward that goal, he started the Moving Forward Rehabilitation and Wellness Centre in London, Ontario. He helped design the facility to assist people with disabilities to retrain their neurological system and get back as much movement as possible. Mike is also actively involved with Western University, helping nursing students understand the role of nurses during the recovery process for people with disabilities. Mike volunteers with the March of Dimes, serving as the master of ceremonies for the 2018 March of Dimes Canada Opening Doors for Accessibility conference series and is at the forefront of fundraising and peer support initiatives. An engineer by trade, Mike helped design his own fully accessible home, which he opens to the public for training and educational purposes.

Dylan Itzikowitz, BA’16 (Huron), from London received the Youth Leadership Award for his work to bring people together to establish The Forward Movement, which has inspired municipalities throughout Ontario to adopt a Dynamic Symbol of Access.

While in hospital recovering from a life-threatening accident, Itzikowitz established The Forward Movement initiative to challenge ableism in Ontario. One key tool was a new Dynamic Symbol of Access (DSA). The symbol represents movement and the need to remove barriers people with disabilities experience. In the two years since his accident, Dylan has established partnerships with all levels of government and engaged community leaders to support The Forward Movement and the DSA symbol. The DSA symbol is now being used in several cities across the province. Dylan is also a sought-after speaker on disability issues.