Finding self, community in new venture 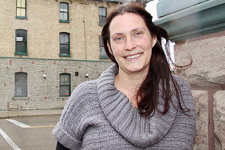 Carolyn Holdsworth, BMus’01, MMus’03, is using her operatic voice in a new way – by singing the praises of her latest creative venture – what she refers to as “urban art wear.”

Holdsworth is the founder of Me & C, a London-based, London-themed shirt company that combines her creative spirit with a bit of social entrepreneurship.

“My art and creative process that I loved about my singing, I’ve brought to this new part of my life. It’s something I can offer back to the community,” explained the Don Wright Faculty of Music alumna.

The opera world was tougher than she expected. After moving to Toronto following graduation, she tried to break into the business for close to seven years, but “really struggled with the auditioning process.” In the end, she chose a different direction.

“I did some volunteer stuff, but not a lot of performing,” she said. “You have to be OK with rejection; there’s also a lot of anxiety around it. I didn’t have the constitution for it. It was challenging, so I stopped for a while and never really got back to it.”

Searching for something that would be as fun as singing, Holdsworth took on a handful of different pursuits and, one day on a whim, took a silk-screening workshop from a Toronto artist she admired. It was fun, as her other pursuits had been, and she never gave it a second thought

Moving back to London in 2014, and now working as an executive assistant for Pillar Nonprofit Network, her creative juices were rekindled, this time to bring her artistic side to the masses.

With so many historic sites throughout London – Aeolian Hall, Call the Office, Labatt Park, Blackfriars Bridge and, yes, even the Western campus – Holdsworth creates her shirt designs from the photographs she snaps of these, and other, landmarks around the city.

With non-profit locations such as Childreach and Museum London also featured, she donates a portion of those shirts proceeds to support those organziations.

While she has sold numerous shirts, no two are the exactly the same.

“I’m sort of building community through art and, like artwork, each shirt is unique. It’s low tech and I love it that way,” she said. “They are the same design, but they’re hand-screened so there will be slight differences to each.”

In the name of the company, Me & C, the ‘C’ is a reference to her nickname while a student at Western.

The company is an ideal way to showcase the things she loves about living in London. It has quickly become a community project, with people approaching her at her weekend location at the Western Fair Farmer and Artisan Market to offer their suggestions.

“They grin at my T-shirts like they just saw an old friend. I’ve created designs of the places where people had their first kiss or said their last goodbyes,” Holdsworth said. “It’s been amazing to turn this from something about me and my trying to reconnect with the city, into something about everyone. The ‘C’ may stand for Carolyn, but it could really stand for community, compassion, connection or creativity.”

The shirts are photos that provide an opportunity for conversation, she explained.

“People will look at the shirts and say, ‘Oh, that’s cool. I remember that place.’ There’s an emotional connection for them. It starts people talking about how much they love their city and the places in it. And I get to explain some of the places people don’t know about.

“Everyone experiences London differently, whether you’ve been here for a day or 20 years – your experience is true for you.”

Me & C was born out of a desire to connect not only with London, but with her creative side, as well.

“The singing is going to come back in some way. I miss it; it’s important to me,” she said. “This is allowing me to keep that creativity going. My time at Western was a time of creativity, and so this is reconnecting with that time and the relationship with that creativity.”